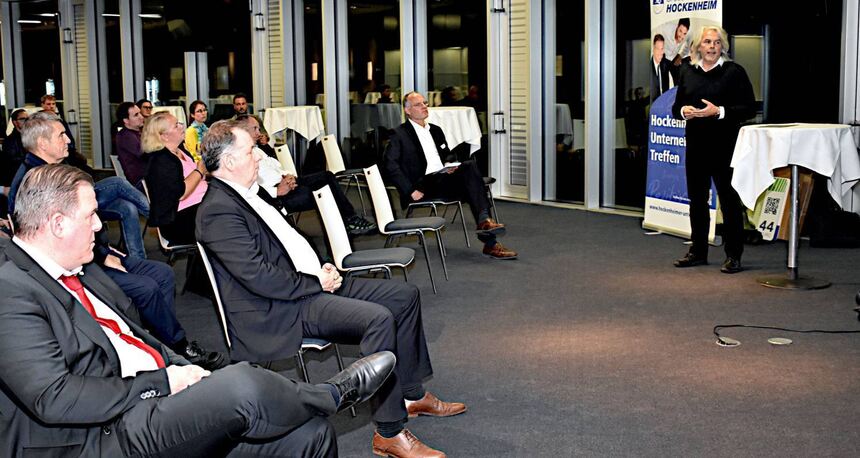 Emodrom group CEO Thomas Reister (r.) Explains to the audience, including OB Marcus Zeitler (l.), At the 26th entrepreneurs meeting the activities on the Hockenheimring. © Image: City of Hockenheim

Hockenheim. Developing Hockenheim together: This motto was the focus of the 26th Hockenheim entrepreneur meeting. Both the Emodrom Group with CEO Thomas Reister and Lord Mayor Marcus Zeitler emphasized that future challenges can only be achieved in close cooperation.

Economic promoter Donald Pape-Rese welcomed the participants, Lord Mayor Marcus Zeitler and Mayor Thomas Jakob-Lichtenberg. Together with board members Julia Weinmann-Klausmann and Richard Damian from the Hockenheim Marketing-Association (HMV), he presented the new Hockenheim shopping voucher, the “Racing city map”, and its advantages for companies. “For you as an employer there is the possibility of a monthly tax-free allowance for your employees – and the money then stays in Hockenheim.”

Thomas Reister went into the developments on the ring since 2012. Started with the vision of strategically developing the Hockenheimring and positioning it in the field of future-oriented mobility, Emodrom GmbH was founded together with Hockenheimring-GmbH. Since then, Emodrom GmbH has been working on numerous future projects as part of the group, which were particularly visible in Hockenheim through the construction of the Porsche Experience Center.

“A reference building for the future Porsche Experience Centers, which are currently being built in Italy and Japan, for example, was built here in a year,” Reister proudly emphasized. Under the heading “Mobility Forum”, the CEO presented further construction projects on the Ring, which could include the construction of a new hotel.

“There is interest from hotel operators. However, we only make the decision together with our colleagues from the Hockenheimring at Emodrom GmbH, whereby of course the interests of the employees are given special consideration. With the new hotel, however, we would have the chance that more guests would stay here in Hockenheim, for example at major events, instead of resorting to the surrounding opportunities, ”said Reister.

In addition to construction projects, Reister also mentioned the Emodrom Group’s commitment to training, new digital formats and sustainable energies. This is what he called the E4 Testival, the E4 Qualification, the Emodrom Academy and the new “Mobile” funding project together with KIT and the Hockenheim public utility company. This is where battery cells from the automotive industry, whose life cycle for e-cars is complete, are used as mobile energy storage devices, for example for industrial purposes.

Mayor Marcus Zeitler also took up the ball of joint development: “We can only do it together with you,” he appealed to companies to keep in direct contact with the town hall in the event of suggestions and criticism. “Because our common goal, yours as an entrepreneur and we in the city, is the same: We want our company, the city and the employees to do well,” concluded Zeitler.